Eleanor Bone (1911-2001) was a famous witch and priestess in the Gardnerian Wicca tradition. Her hard work in the media to dispel misconceptions about Wicca, and her diligent endeavors within the Wicca community, has lead her to have the largest downline in Europe.

This site was initially published to aid the memorial fund for raising a gravestone for Eleanor Bone. She had been buried in a pauper’s grave, without a gravestone, because the local council had been unable to find Eleanor’s last remaining relative. The response of the Pagan community was overwhelmingly wonderful, and within several weeks the target amount was raised. A beautiful gravestone was bought, and it was quite likely the first gravestone in England with a pentagram on it.

On the 12th of September 2015, a large group of Pagans gathered to commemorate and celebrate Eleanor Bone’s life, and to unveil the gravestone. Eleanor’s granddaughter was also present, who had given full support to the initiative. 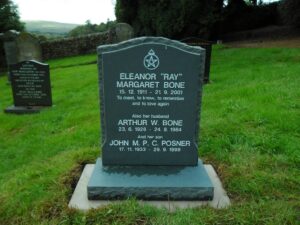 This website will remain in place to celebrate Eleanor Bone’s life, and to acknowledge the work that she has done to further the Craft.