I had a call last week from a public relations officer with a difference. Mrs Eleanor Bone, of Trinity Road, Tooting, matron of an old people’s home, and high priestess of a respectable London coven, who has taken over the role of P.R.O. (unpaid) for most of Britain’s witches.
Mrs. Bone, like any good “new broom” (sorry!) wants to start right by improving the public image of Britain’s witches.
“What I want people to know” said Mrs. Bone seating herself opposite me on the sofa next to the altar in her drawing-room coven, “is that witches are not the black-hearted monsters they’re made out to be in fairy stories.
“We have our black sheep – the black witches – just like any other group, but no decent coven tolerates black magic these days. White witches (the good ones) can serve a useful social purpose.
“Only recently we cured a case of dermatitis – after a doctor had tried, and failed. And we also managed to put things right for a woman who was having trouble from an eternal triangle. 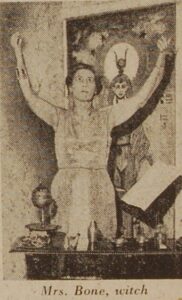 “She came to us complaining that her husband had become a little too interested in his secretary – until the coven got together and the secretary developed a mysterious complaint which kept her off work long enough for her boss to come to his senses.”
It was all done by harmless white magic. High Priestess Mrs. Bone and a few fellow witches, and warlocks, got together, took off their clothes, and chanted and danced around the witches’ ring in her drawing room – this brings out the pent-up powers needed to put things right.
“Don’t think we have orgies, or anything like that,” insisted Mrs. Bone. “We take our clothes off to facilitate the release of these power-energies. Also, it’s symbolic of the democratic process within the craft. Whether a member’s a doctor or a secretary – they all feel equal.
“After we’ve performed our rites and ceremonies we sit around drinking tea or coffee. What could be more respectable?”
And what about those broomsticks and cauldrons?
“Window dressing” explained Mrs. Bone. “Broomsticks are traditional, but they don’t have any ‘magic’ properties. And as for cauldrons – they’re only used once or twice a year. I usually keep mine in the boot of the car.”
Mrs. Bone is a very frank person. So is her husband – a sheet metal worker. “So far”, he told me, “ I haven’t heard the call. When the coven’s in session, I take the telly in the bedroom – and let them get on with it.”