Note: This article was published in the The Robesonian,  March 2nd 1975, in the column “The Unexplained” by Allen Spraggett. The article mistakes Eleanor’s name for ‘Elizabeth’ in several places.

Most self-styled witches, I’ve found, are bores who couldn’t be duller if they tried. Practicing “witchcraft” is the way some middle-aged suburbanites get their kicks. This kind of witchcraft is about as authentic, or exciting, as the ghosts and goblins of Hallowe’en.

But there are witches and witches. Not long ago I met one who claims to be real. Her name is Elizabeth Bone and she lives in the London Suburb of Tooting Bec.

Mrs. Bone invited me to attend, as an observer, a ceremony of the London coven, of which she is chief witch. The ritual was held in a secluded glen in Surrey.

Eleanor Bone, high priestess of the coven, whose witchly name is Artemis, shed her clothes, tied a simple cord around her waist, and under the full moon invoked the ancient pagan deities of her cult.

Sprinkling incense she walked slowly around the witches’ circle marked off by her nude followers, chanting: “We summon you, O ye gods of the north, and of the south, and of the east, and of the west.”

Then, seizing a long dagger, she plunged it ceremonially into a goblet of wine, held by her high priest, a bearded man wearing only a helmet with stag’s horns.

“Thus”, she intoned, “does the female conjoin with the male to produce fertility and life”.

The ritual concluded with the witches joining hands and dancing wildly in a circle, chanting in a strange tongue said to be ancient Celtic. The purpose of this dancing, they said later, was to generate the power needed to work their spells.

To wind things up, each witch, men and women, leapt over a blazing fire. This, they said, symbolized their willingness to go through any ordeal for their faith.

Yes, FAITH. Make no mistake. For the sincere practitioner of witchcraft, such as Eleanor Bone, it is nothing less than a religious faith.

“I am a pagan”, Mrs. Bone said proudly, “I was baptized a Christian, but I left the church when I was still a child.

“My religion now is the old religion  – the one that goes back into the mists of time, much further than Christianity does. I believe in and practice witchcraft, the way other religionists practice their faith.”

A highly intelligent, articulate woman, Mrs. Bone took great pains to clarify what she calls the “confusion in the public mind” between white and black witchcraft.

“We practice white witchcraft” she said, “We have no truck with the black variety, any more than most Christians would want to be associated with the members of their faith who in the past, and even the present, have persecuted and killed what they called heretics”.

But of what does the practice of witchcraft, black or white, consist?

“The concentrated belief of the witches’ coven can generate a power that produces apparent miracles,” Elizabeth Bone explained.

“We only use this power, this magic, if you like, to bless. Black witchcraft uses it to destroy, just as fire may be used to heat a house or to burn it down.

“We bless the person for whom we cast a spell. But a black witch, using an image of the person, can curse him. And it works.”

Mrs. Bone confided that a certain witch in London freely offered to cast evil spells for a fee, and her nose crinkled with distaste as she assured me that no self-respecting white witch would ever associate with him.

As evidence that her coven’s magic is effective, Mrs. Bone mentioned the case of a seriously ill baby who improved dramatically within hours of having a spell cast for him.

The power of suggestion? Or something more? 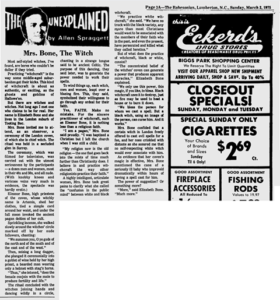